You can see the Combat Class of your team in the team formation menu.
Formula to count the Combat Class is the individual number for each character is determined by adding up their primary stats (HP, defense, attack, and combat class) and dividing that by 3.
The how to increase Combat Class? The easy way, of course, is leveling your hero. By leveling your hero automatically your hero status will be increased.
The immediate consequence of this Combat Class formula is a sort of percentage bias.
Why? Because if either of your stats, for example, your attack, is overwhelmingly higher than the others, then it will count more towards your overall Combat Class.
Also, given its outstanding impact on your total stats, gear comes in a close second in terms of importance, but it enough to say that the main stats of your hero are the ones you need to focus on. 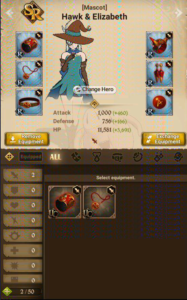 Beside your hero gear and level, there is another factor that can increase your Combat Class.
Its the hero Ultimate Move, Awakening, Evolution, and Clothes will also increase your overall Combat Class.
Let’s look more closely at each of these categories and discover the underlying mechanics.

For each hero evolution stage of your ultimate move, it will increase you, combat class, around 400 CC to your total.
If you manage to max out your line-up, you can do that times 4, and then times 6, which cashes in a handsome 9.6k.
Aside from this outrageous increase in stats, each additional level will increase the skill’s effectiveness tremendously.
For example, Green Hawk & Elizabeth will soon benefit from an outrageous 1050% of attack and stance break at the max level. 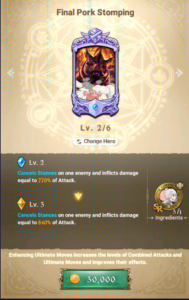 To improve each character’s ultimate, you’ll need to use coins. There are two ways to get these:
For instance, we really want to improve Howzer’s ultimate now, since it does outstanding damage to everyone and depletes their ultimate gauge.
To get the coins we need, we’ll trade some of the other ones. Note that you can use silver tokens to get gold ones, and gold to get purple, but with a 30 to 1 ratio, it’s going to be an uphill battle.
This is the reason why you’ll see many high-ranked players with SR supports – their ultimate skills don’t take forever to level. 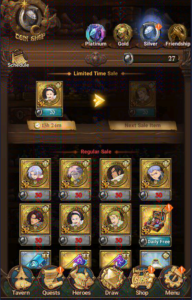 You can also buy other items with the coins, such as hero enhance potions, strength awakening boxes or evolution pendants, but don’t do that.
At least not until you’ve reached the endgame and maxed everything out.

Evolution is the upgrade you’ll constantly have to do since it increases your level cap and it adds a noteworthy boost to your main Combat Class Point.
The requirements for evolution include several Grimoires of the hero’s specific type aside from a number of pendants. You can get it from SP dungeons. 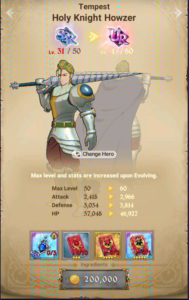 Awakening increases your number of stars. Each orb has at least one primary stat reward for you, as well as several secondary ones.
These ingredients are usually easier to farm. The primary source is completing world stages, which you’ll be able to flash farm given the right team composition.
Last, but definitely not least, the costumes are also worth your attention. Although less important than all of the previous categories, their aesthetic is complemented by a slight utility boost.
For instance, this bard costume we got for Hawk & Elizabeth increases her defense and HP.
Many players tend to forget that characters have a unique passive, which takes quite a bit of Combat Class to unlock.
For many units, such as Escanor, this is a crucial aspect of unlocking their true potential.
To give you another example, Howzer increases all humans’ basic stats by 8%. To benefit from this, however, we need to get to 16k CC. 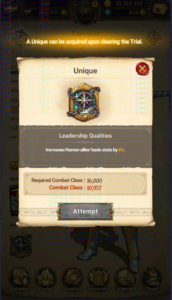 These are the main avenues of increasing your Combat Class in The Seven Deadly Sins: Grand Cross.
Whatever you do, make sure to settle on upgrading heroes that will be worthwhile during the mid and late game.
We know it can be tempting to go with the characters that we all know and love from the manga or anime series, but they don’t always make for the best long-term investment.
Don’t worry, though. As you complete more of the game, you’ll acquire enough mats to upgrade everyone you’re attached to.
Have fun!
« Best F2P Hero Seven Deadly Sins: Grand Cross
Seven Deadly Sins Grand Cross Guide Complete »