Hello friends, this is Blade and Soul Revolution faction guide for the new players. Faction info, How to chance faction, Strongest 111
Another guide: class and race guide.

You can check the faction you’ve joined, the information on the current Grand Master, and the faction notice.

1) You can view the notice and info of the faction you joined in Faction Info.

① Faction Info can be accessed from the main screen by tapping [Menu] → [Faction] → [Faction Info].
♠ You need to be in a faction to check the faction info.

⑤ You can view the faction war and faction ranking change history in Faction History.

2) Only the Grand Master can put up faction notices.
① Grand Masters are decided by the weekly faction points.

② Grand Masters are displayed with an icon to the right of the notice. 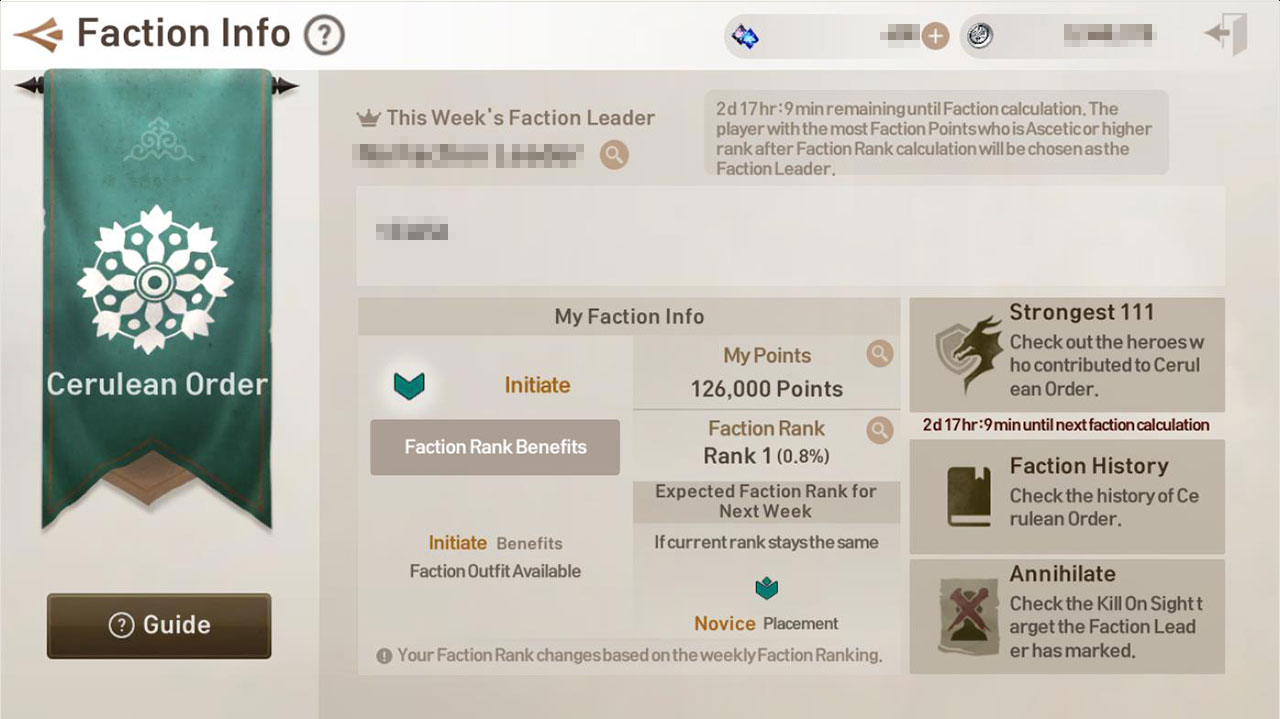 ① The top 111 players with the most faction points become Strongest 111 in the faction.

② The 111 are comprised of a Grand Master, Masters, and Champions.

③ You can check the info of players with higher ranking in the Hall of Fame.

④ [Rank Bonus Info] shows all the different bonuses for each rank in the faction.

⑤ You can check the Grand Master’s clan info and character info.

② Faction History is divided into Faction War, Rankings, and My Battle History.

2) Faction War
① You can see the faction’s victory or loss in the Faction War.

3) Rankings
① Rankings based on Faction points are available for viewing.

② You can see the Strongest 111 and Top 9 Clans history in the ranking change history. 4) My Battle Record
① See the history of defeating or getting defeated by the enemy faction.

② See faction ranks of defeated players and the points you won.

③ See faction ranks of players who defeated you and the points you lost.

You can view the Faction Membership Ratio and faction points here.

③ You can check the faction points for each area in the daily status.

– Each faction war status can be seen in [Faction Info] – [Faction History].

④ Weekly rewards are delivered after the faction weekly calculation, based on the points and ranks.

⑤ Check the reward in the results screen.

① Rewards differ based on the results of the faction war.

② Rewards differ based on the faction rank.

③ The higher the rank, the better the reward.

④ Check the Result and the Reward to claim the reward.

– Find the reward in the inventory.

♠ The Weekly Reward can be claimed until the next faction points calculation.

1) You can check the membership ratio between the Cerulean Order and Crimson Legion. 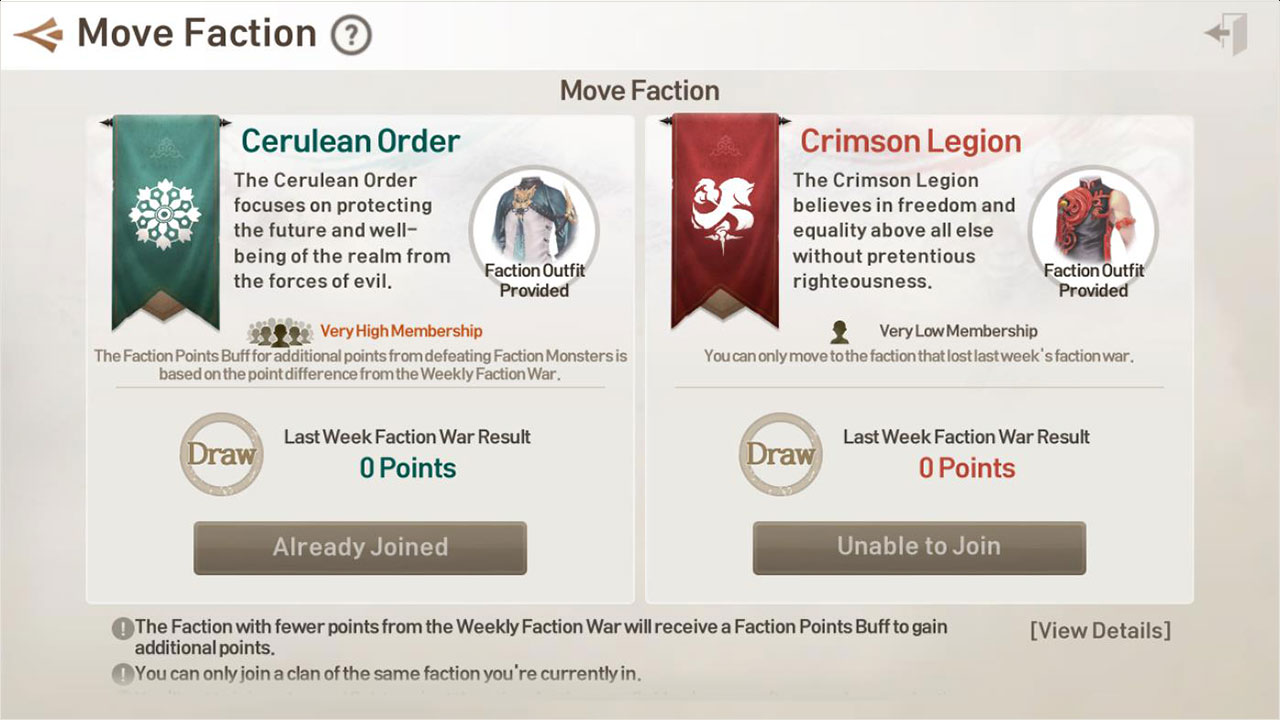 2) You can switch factions in the Membership Ratio menu.

– You might not be permitted to switch if the membership difference between the factions is too significant.

How to Change Factions

Factions can be changed from the Faction Status page.

1. How to Change Factions ② Tap the Change Faction button from the [Membership Ratio] screen to change factions to what’s been selected.

– The faction you are currently in can’t be selected.

– Factions that have Very High Memberships can’t be selected.

2) Faction can be changed 14 days after joining one.

1) Faction Rank and Points may change when you switch Factions.

① Players in Grand Master, Master, and Champion ranks will downgrade to Ascetic rank and have their Faction Points reset.

② All other ranks will maintain their current rank. However, Faction Points will reset.

① Faction changes are unavailable if you’re in a party or clan.

② Change Factions after leaving either.

② Faction changes are unavailable if you’re on either of those faction-exclusive quests.

4) Membership Ratios for Factions
– Factions with high membership will have join restrictions that apply to players seeking to join or change factions.

5) When 14 Days Have Not Passed Since Last Change
– Factions can be changed 14 days after joining one, or since the last change.

How to Become One of the Strongest 111

The top 111 ranked players for each Faction are eligible to become the Strongest 111.

2) Each faction has its own Strongest 111.
– The Grand Master and Masters can use the Faction Megaphone.

3) Strongest 111 Benefits
– They can receive buffs that increase stats.

1) Players start as Initiates upon joining a Faction for the first time.
① They are granted 1,000 Faction Points.

② Faction Points decrease for even Initiates if they are brought to Near-Death or killed by an opposing faction’s character.

– If the target score isn’t reached by the time faction points are calculated, players must wait until the next calculation time.

♠ Ranks won’t increase if you don’t meet the requirements by the time points are calculated.

2) Characters in the Ascetic rank will be ranked based on rank order during the calculation period.
① The #1 ranked Ascetic in the Faction will become Grand Master.

② Ascetics ranked #2-11 in the Faction will become Master.

③ Ascetics ranked #12-111 in the Faction will become Champion.
♠ Characters ranked Grand Master-Champion will immediately be demoted to Ascetic if they fall below rank 111.

3. Faction Strategies with the Strongest 111

① The Grand Master and Masters can use the Faction Megaphone to quickly send strategic information to all faction members.

③ Faction members can quickly call for assistance in War Zones if needed.
– If combat isn’t going well they’re able to send information, such as their location/channel.

Purchase items at the Faction Shop that help your Faction.

1. What is the Faction Shop?

1) Available upon joining a Faction.

2) You can join a Faction after completing the Act 1 Main Quest “The Call of the Warring Factions.”

3) Two factions exist: the Cerulean Order and the Crimson Legion.

4) More items become available as the Faction Rank increases.
♠ There are 10 Faction Ranks, ranging from Initiate to Grand Master.
Rank is determined by Contribution acquired from taking actions such as eliminating characters from the opposing faction or defeating enemies.

2. How to use the Faction Shop

– Designs: You can purchase Designs for crafting equipment.

– Materials: Enhancement Stones required to enhance the equipment can be purchased.

② Tap the item price to view the item’s details.

③ After selecting an item, tap Price (currency amount) to spend the set price.
Purchased items will be immediately sent to your Inventory.

④ Only the winning Faction members can view the sale items in a village store.